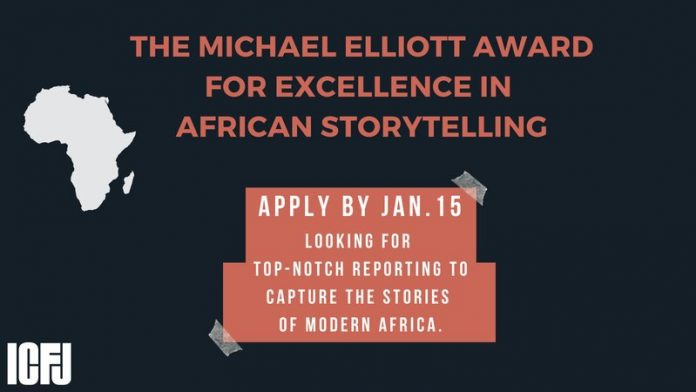 The Michael Elliott Award for Excellence in African Storytelling, a collaboration between the International Center for Journalists (ICFJ), the ONE Campaign, and the Elliott family, honors up-and-coming journalists in Africa who strive to strengthen people’s voices and illuminate the transformational change taking place on the continent.

The Award was established in honor of the late Michael Elliott, an outstanding editor, philanthropist and former ICFJ director whose life was a testament to the power of storytelling to bear witness to and improve the human condition. Elliott served as a distinguished editor at The Economist, Newsweek and Time before becoming CEO of ONE. In 2016, he spoke of his dream to establish an award that would bring together his belief in the power of great journalism with his commitment to progress in Africa. Past award winners include Mercy Juma and Dorcas Wangira of Kenya, and Kiki Mordi and Abubakar Ibrahim from Nigeria. Each participated in a study tour of U.S. newsrooms and was awarded a $5,000 cash prize.

In a special study tour organized by ICFJ, past winners have spent time in U.S. newsrooms in Washington, D.C., and New York City to learn new skills and share knowledge. In 2019, the winner also completed a two-week internship at The Economist’s headquarters in London, United Kingdom.

Call for 2021 AGYA Membership: The Arab-German Young Academy of Sciences and Humanities (AGYA)